The annex housing the music department at Austin Public High School (AHS) in Austin, Minnesota, was originally established in the 1940s and hadn’t been through any major renovations.

AHS serves 1,450 students in grades 9-12 each year. It also hosts MacPhail Center for Music programs, reaching 1,500 students of all ages, including adults. This increased enrollment had the annex bursting at the seams. Plus, with its diverse student base, the facility lacked adequate practice and rehearsal space along with the latest technology needed to advance their music education.

“We wanted a space that allowed MacPhail and our school to reach more people through music,” said Cheryl Berglund, Austin Site Director for MacPhail. “We already had excellent music programs, we just needed room to grow and the technology to flourish.”

The complete renovation of the music facility at AHS all started with a partnership with the MacPhail Center for Music and the Hormel Foundation. 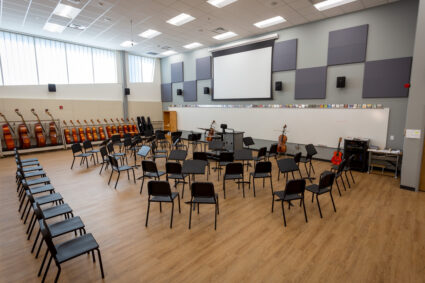 The “MacPhail project” began with a feasibility study that revealed a community desire to partner with MacPhail. The Hormel Foundation, known for its community involvement, provided additional funding to make the project possible.

In the past, MacPhail had also rented space at a local community college. This new project enabled them to move into this facility to operate their student and adult music education programs.

“We do a lot of work with schools throughout the state, but this is the only location where we’re fully integrated with the entire district. It’s the first site MacPhail has ever developed outside of the metro area, and it is unique in the country to have a community music school housed inside a high school music site,” said Paul Babcock, MacPhail President and Chief Operating Officer.

“Together, we created something really special for the students and surrounding community.” 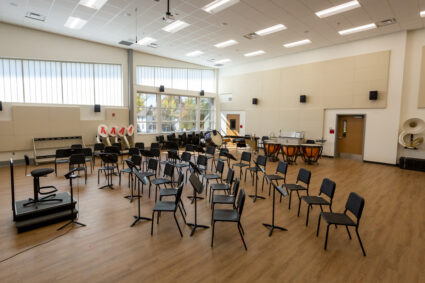 Creating Room to Grow with the Technology to Flourish

It took a village to make this vision a reality. The project team included AHS administration, architect ATS+R and construction partner, The Joseph Company, who created a plan to renovate and renew the school’s music program. The team also chose to partner with nearby Wenger Corporation to refresh and reinvigorate the entire music program with first-rate acoustic upgrades.

One big problem they had to tackle was the new choir room that would be on the building’s main floor. It had a shallow, 8-foot high ceiling, which didn’t provide enough volume to be an effective space. Architect ATS+R suggested digging a hole in the center of the room to create more volume.

AHS staff had also been considering an active acoustic system. Wenger Corporation invited the team to Owatonna to hear for themselves what their systems sounded like and learn more about the technology benefits of virtual acoustics for practice and performance.

“They showed us this fantastic technology that can make our practice rooms sound like Knowlton Auditorium, our performance space at the high school,” Berglund said. “That kind of technology makes such a difference in the way we practice and perform. There’s never enough time to practice in the actual performance hall, so this is a great alternative.” 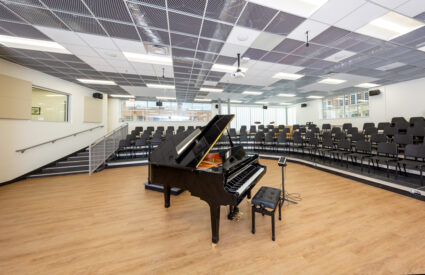 The VAE Rehearsal Systems include an array of microphones and speakers that can mimic the acoustics of a broad range of performance venues — from a large recital hall to a cathedral to a small auditorium. The goal is to help performers hear what they’ll sound like at a venue they’ll be performing in.

“The system adds acoustic energy back into the room and provides a truly unique teaching tool for the instructor,” Hildebrand said. “When the system is off, the classroom is quiet and ideal for spoken instruction or teaching music theory.”

The original plan only called for a single VAE system in the band room. However, as the project progressed, school district officials decided to dip into a contingency fund to finance additional VAE Rehearsal Systems for the choir and orchestra rooms. The thought is that having this technology available throughout the facility creates continuity among all programs.

“For singers, the acoustics of a room are like the body of our instrument: we need it to help us sound our best,” explained Kalle Akkerman, AHS Choir Director. “When the music sounds good, it makes us feel good. It brings us a sense of togetherness that we never really got – aurally – in our old choir room.”

Akkerman said students tell him that they can now hear all of the parts in the chorus, compared to the old space, where they couldn’t.

“When we can hear each other, we can fine tune our sound and evolve into more focused music-making,” Akkerman said.

VAE also allows the musicians to record and play back their practice sessions, helping them adapt and improve their performance. Those recordings can also be downloaded to other devices to share or perform accompaniments or, in Akkerman’s case, to submit for state competitions.

“I will often record rehearsal, and then play it back for my own personal teaching reflection. I can also record the choir singing something two different ways, allow them to hear both examples and make a decision about how they want to perform it.”

A Music Experience for the Entire Community

By fall of 2020, renovations and the upper addition were complete, and the new and improved music annex was fully operational.

The MacPhail Center for Music moved into the former orchestra and band rooms on the main floor. This year, they complete their fifth year of operations in Austin. To date, they’ve reached 1,500 students per year out of 25,000 total residents.

MacPhail also shares common spaces with AHS, like a centrally located gathering/performance area that opens into a large “learning staircase.” This staircase serves as both an area for students to congregate and a place to listen to performances.

“I love that they now have this wonderful place to hang out,” Berglund adds. “They’re going to be there to collaborate more around music.”

Additional practice rooms of different sizes and four more VAE Studio systems were installed on the second floor for individual private lessons and ensemble training. Rounding out the space is an area for music therapy, early childhood music classes and staff offices.

“People love hearing about this partnership,” Babcock says. “It’s a really fun story to be part of and a wonderful project that will benefit this community for years.”

“This facility is a focal point and enabler for entire community to experience music,” Babcock said.

Introducing Vantis™: It’s All About Control

I.M. Terrell High School: A Beacon for the District and the Community