Christmas at Luther: When You’re Planning a Large Musical Event, Collaboration is Key 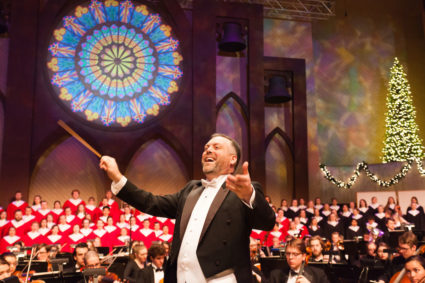 In the weeks leading up to Christmas, nothing compares to the spectacle of a large-scale holiday concert in an awe-inspiring space. These shows are a favorite holiday tradition for families across the country and, thanks to advancements in technology, they can now be enjoyed in person, on television, and online.

When you’re watching these performances, it’s hard to imagine the planning it takes to bring them to life. In many cases, ideas for the next year’s show are already brewing when the curtain falls on this year’s final performance. To learn more about what it takes to produce a spectacular holiday concert, we spoke with the team behind the annual Christmas at Luther production.

Christmas at Luther has been a holiday tradition at Luther College for 37 years. Throughout its lengthy history, the event has grown to become more of a theatrical experience than a music performance alone. This year’s concert Every Voice in Concert Ring featured more than 450 singers and 100 musicians in addition to dancers and narrators, and it was enjoyed by more than 8,000 people.

The magnitude of this annual concert series has led it to become a significant part of the Luther College campus where it touches everyone from staff, students, and admissions to the theater box office, custodians, and cafeteria. In order to produce this extensive event, planning begins a year in advance, and Christmas remains top-of-mind at Luther College no matter the season. 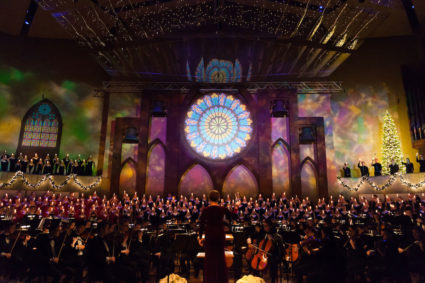 Under the artistic direction of Andrew Last, Christmas at Luther features five choirs, a symphony orchestra, a handbell choir, and an organist performing in the Center for Faith and Life. The foundation of the performance is built around the concert’s theme and three primary pieces of music that feature all of the students performing together.

“To those that attend Christmas at Luther, the event is filled with artistry, emotion, and precision,” Last said. “For the conductors, musicians, and production team, it is a complex yet incredibly satisfying puzzle.”

Initial ideas for the concert theme are percolating in the spring, and the artistic committee is already meeting by March. This committee includes conductors from each ensemble and the campus pastor planning the text and narration for the event. By April, the team confirms the theme and selects the foundation pieces. This leaves each person on the artistic committee with time to focus on their additional components of the concert over the summer. These ensemble pieces are designed to bring variety to the program but also fit within the context of the larger theme.

Throughout the summer, Christmas plans are officially ramping up at Luther College. The team outlines their equipment needs and the technical aspects involved in recording the performance. Preserving these unique performances on video has become a long-term goal for the campus and adds additional complexity to producing the Christmas concert. Whether you’re recording an entire holiday concert or a few highlights, it’s a lengthy process determining the video perspective as well as the number of camera operators required to capture a musical event.

“Camera operators need to know where the soloists are or what sections of the orchestra should be featured at any given time. So, it takes a lot of advanced work for them as well,” said Susan Potvin, production manager for Every Voice in Concert Ring. “It’s definitely not possible to just show up that night, record everything, and have it look absolutely perfect.” 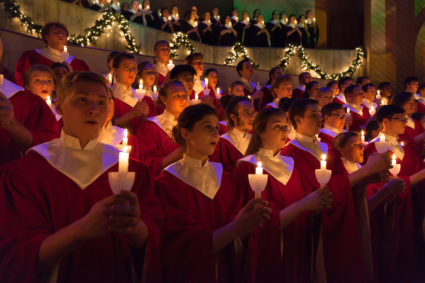 Christmas at Luther features approximately 450 singers performing with the Aurora, Cathedral Choir, Collegiate Chorale, Nordic Choir, and Norsemen. The Symphony Orchestra showcases between 80-100 students, and there are 15 students in the Luther Ringers handbell choir. Auditions begin early in the academic year to determine ensemble membership.

Students outside of the music department also mobilize to support all aspects of the production, including designing and building sets for the show. The box office also plays a significant role in event planning by determining the number of available seats and managing their sale. The box office coordinator also works with the student activities office on organizing buses to ensure student performers make it back to campus in time to begin rehearsals on Thanksgiving weekend.

As Thanksgiving approaches, it’s all hands on deck for Christmas at Luther. It has become a long-standing tradition for the first full rehearsal with choirs and orchestra to take place the Sunday after Thanksgiving. Before that can happen, though, approximately 25 staff, technicians, and student workers converge the Monday before Thanksgiving to make sure the Center for Faith in Life is ready for the performers.

“Everyone who can chip-in is helping us get ready by setting up Christmas trees, plugging in lights, and stringing garlands,” Potvin said. “We’re also making sure that choral risers are appropriately in place and secured together, setting up the orchestra, and our technicians are preparing the space.”

When the students arrive for their first full rehearsal at 3pm, all of their movements have been mapped out in advance in detail. Still, this initial run-through ensures the creative team can make adjustments if needed so the performers can move seamlessly throughout the program.

“Whether it is figuring out how to physically move 500 singers from one position to another in three minutes or less or choreographing the climactic moment when 500 candles are elevated in the hall, this event’s success is all in the details. Collaboration is key. Communication is essential,” Last said.

Over the next three nights, everyone rehearses nightly until the Wednesday night dress rehearsal. This public performance is the first time the students come together under the lights with their robes on which makes the rehearsal as close to the real thing as possible.

Throughout the rehearsal and performance schedule, the cafeteria even has extended hours to ensure the student performers have plenty of time to eat.

The five Christmas at Luther performances begin the Thursday after Thanksgiving and run through Sunday. The premiere concert event has become a popular visit day for prospective students who can also sit in on rehearsals, audition, do campus tours, meet with faculty, and get a taste of this impressive show. They’re also invited to try singing some of the music during the afternoon and get to attend the evening performance after their admissions dinner.

“As one of my colleagues mentioned, Christmas at Luther is the perfect display of the liberal arts experience,” Last said. “This production showcases music, theatre, dance, literature, and theology. When over 8,000 people experience this performance, they experience Luther College. It is a powerful messenger for the mission of the college.”