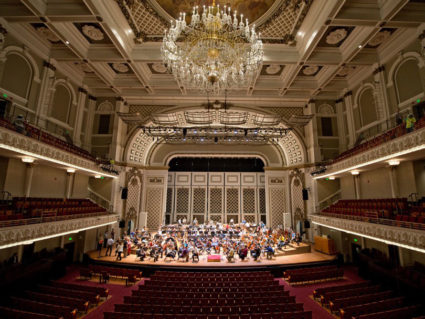 Built in 1878 over a pauper’s cemetery, the Cincinnati Music Hall is a classic entertainment venue filled with High Victorian Gothic grandeur. So much so, it was designated a National Historic Landmark in 1975.

But that hadn’t stopped time from taking a toll on the city’s stately redbrick Music Hall. It was no longer meeting the needs of performers, nor the expectations of audiences and visitors. The multi-use Music Hall is home to Cincinnati’s symphony orchestra, pops orchestra, opera, ballet, and the May Festival Chorus. Plus, it has hosted star entertainers from crooner Frank Sinatra to musical genius Prince.

If Music Hall was to resuscitate its reputation as one of the world’s greatest performance locales, it needed a facility-wide renovation. It hadn’t done so in over 40 years. The nearly 3,500-seat Springer Auditorium (the Hall’s main auditorium) would be the primary focus, with upgrades throughout the building.

Using public and private funds, the City of Cincinnati launched a $143 million renovation in 2016, with a caveat: the renovation must be completed in just 16 months. The City secured a temporary relocation for the symphony orchestra and closed Music Hall for construction in early June 2016. Through incredible teamwork and custom solutions, the project was completed on time and on budget. Music Hall reopened to a sold-out symphony concert in Oct. 2017.

The city hired Akustiks acoustical consultants and Schuler Shook theatre planners. Christopher Blair is a partner at Akustiks and its chief scientist (as well as an orchestra conductor). He described the goals and challenges of addressing the deficiencies within Springer Auditorium:

“We wanted to help create a closer relationship between the audience and performers but maintain the signature sound of the historically protected building. That created limitations on what we could and could not do.”

Indeed, the existing configuration was difficult. There were no cookie-cutter solutions and everything had to look like it belonged in the space. Vendors would need to customize their products, and fast. Everyone agreed that engaging J.R. Clancy and Wenger early on was the right move, said Michael Burgoyne, a partner at Schuler Shook.

“We had tight design and construction times and a complex project. J.R. Clancy’s experience with large, custom rigging solutions made them a perfect fit, and we knew Wenger could handle other custom items and modifications.” 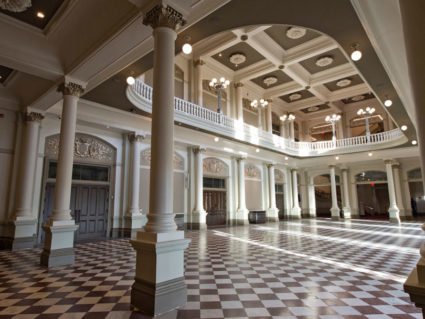 Music Hall had previously made multiple attempts at acoustical interventions in Springer Auditorium. None had fully worked. The auditorium had over 1 million cubic feet of air to fill with sound, reducing the sonic impact of all its tenants.

The architectural partnership of Martinez and Johnson (design architect) and Perfido, Weiskopf, Wagstaff and Goettel (executive architect) got to work. They reconfigured the Hall, moving the stage edge 13 feet out into the audience and musicians in front of the proscenium, with the use of J.R. Clancy-supplied Serapid motorized stage lifts. Wenger created custom choral and orchestra risers elevate performers, which, in turn, would help project sound.

There was still an issue of sound going into the stage house, rather than the audience. J.R. Clancy modified an existing shell tower height from 24 feet to 40 feet by creating a wall extension mechanism. J.R. Clancy also worked with subcontractor C.K. Wegner who fabricated custom acoustical glass ceiling elements (designed by Blair) to act as a canopy over the orchestra platform. C.K. Wegner provided custom carts to store the panels, which can be suspended from J.R. Clancy custom line shaft hoists.

“The additional J.R. Clancy hoists mean staff can quickly fly the acoustical ceiling panels into preset positions and then bring them down into custom carts for storage, and then fly the carts out of the way when not in use. It makes the house and stage more flexible,” Blair explained.

According to Blair, the Wenger and J.R. Clancy team certainly delivered. “They were incredibly responsive, on time and on budget. In fact, they were ahead of time. We needed the custom risers two months prior to the grand opening for acoustical testing, and there they were.” 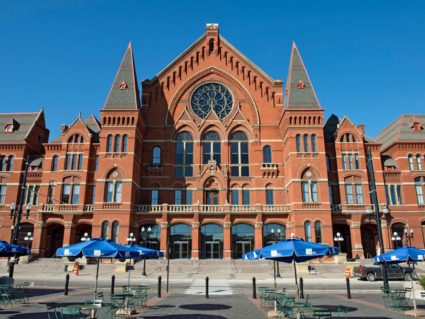 Music Hall’s website promised a dramatic end result: “The auditorium’s warm sonic identity will be maintained, [yet] enhanced by creating an even, present sound throughout that conveys the full timbral and dynamic palette of the performers, and which, in turn, creates an intimate experience between the stage and the audience.”

According to one local reviewer, Music Hall delivered. “The music has never sounded so rich, so detailed, so warm.”

From his previous work with Wenger and J.R. Clancy, Blair knew they could deliver. “Wenger’s team is very professional and responsive, which is critical in a quick-turnaround project like Music Hall. Our client is thrilled with the result.”

Visit Wenger to see how one company can provide the broadest array of innovative, high-quality products and services for your performing arts spaces – new or ready for renovation.

What did USITT 2018 attendees want to know?