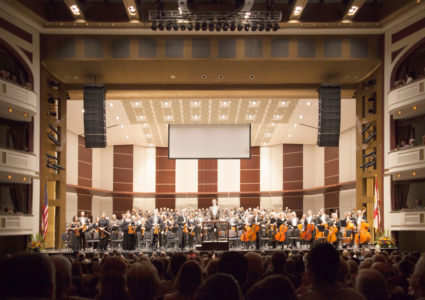 But the visually stunning theater had one problem: it was in desperate need of an acoustical upgrade.

“The Mahaffey was visually the music palace of the region, but the sound wasn’t comparable,” says Michael Pastreich, president and CEO of The Florida Orchestra.

Rick Talaske, president and principal acoustics consultant of TALASKE | Sound Thinking based near Chicago, Illinois, reviewed the current equipment and determined which products would best fit the orchestra’s needs. The primary problem was the 30-year old existing shell was missing a critical piece that was allowing sound to escape into the stage house – sound that wouldn’t make it into the audience.

After considering many options, he chose Wenger’s customizable Diva® Acoustical Shell as the primary solution.

“We have worked with Wenger many times in the past,” Talaske says. “They are one of very few companies capable of creating an orchestra shell of this quality.”

Part of what he likes about Diva is the customization.

“When we designed Diva, we worked with architects who wanted it to be beautiful, acoustical consultants who sought a rich sound, and theatrical consultants who required additional custom parameters,” explains Mark Ingalls, Wenger performing arts segment manager. “For Mahaffey Theater, we knew the answer should allow the design team to customize Diva for their specific space.”

For example, shelves set at specific angles were added at mid-height locations on the towers, and the bases were turned inward to allow larger shelves with greater stability. The heavy weight is needed to reflect low-pitched sound.

“This adds warmth to the quality of sound, much like turning up the bass control on your home stereo,” explains Talaske.

The ends of the canopy elements were tilted downward to a specific angle to help facilitate cross-stage communication. Sound diffusing and sound absorbing finishes were also installed in strategic locations. That helped overcome issues like the proscenium opening being lower than desirable for optimizing sound projection to the audience.

“These changes significantly enhance the ability of musicians to hear sound created on the opposite side of the stage,” Talaske says. “And that helps the entire ensemble perform better.”

“I sat in the audience during the orchestra’s first rehearsal and noticed two things. The quiet passages were much easier to hear. The clarity of individual instruments was amazing. I could really identify the clarinet or oboe or bassoon far better than I could before.”

He also sat on stage during the second performance, near the percussion section in the back where he heard the basses and cellos much more clearly.

He describes how the new system benefits both the musicians and the audience.

“If you’re playing in a void you don’t really know how you sound to the other musicians,” Pastreich says. “You’ve got a conductor and instincts, but when you’re going into the note and you can really hear the violins, it clicks. You play more confidently and the result is a fantastic sound for the audience.”

As with any major renovation, a number of challenges were encountered along the way.

The new ceiling, for example, was much heavier than the old one. The two ceiling rows combined weighed ten tons. Additional structural steel reinforcements were added to support the increased ceiling weight.

There was also the issue of manipulating and moving the massive panels. Fisher Dachs and TALASKE worked with J.R. Clancy, a subsidiary of Wenger Corporation, to develop a way to raise, lower and angle the ceiling panels for performances and then move them into storage.

Due to the weight, J.R. Clancy engineers designed the custom hoists with increased capacities. The two custom tilting hoists position the ceiling end panels, and the custom trim line shaft hoists control the angle and position of the main ceiling rows in performance position.

“Our team creates custom rigging solutions for projects around the world. Our ability to customize almost any product to meet the needs of a space is what sets us apart,” adds Cole.

One last, unforeseen challenge happened just weeks before the orchestra’s opening night. At the time of installation, all of Florida was preparing for Hurricane Irma. The equipment couldn’t be tuned until the hurricane had passed. The final tuning of the equipment happened during rehearsal just days before the first performance.

“Despite those things, on so many levels, this was an exciting experience for the orchestra. Our sound is now comparable with the Mahaffey’s visual beauty,” Pastreich says.

As it turns out, the timing of the Mahaffey acoustical upgrade was perfect. The orchestra kicked off its 50th season at the Mahaffey on October 7, 2017, to a sold-out crowd.

“It was a smash,” says Pastreich. “We were packed and everyone from the musicians to the audience raved about the improved sound quality.”

Visit Wenger to see how one company can provide the broadest array of innovative, high-quality products and services for your performing arts spaces.