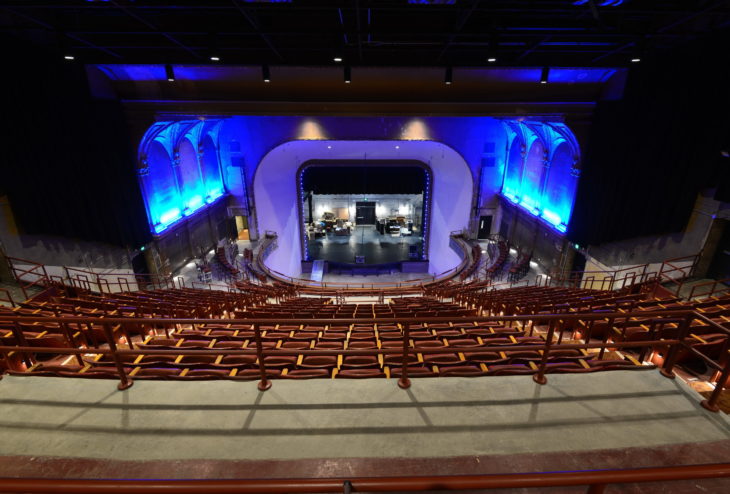 When the City of Saint Paul, Minnesota, purchased the Palace Theatre in the fall of 2015, the run-down building was close to condemnation. Built in 1916, the Palace first served the vaudeville circuit, later became a movie house and eventually closed for regular use in 1977.

Last month the Palace re-opened to rave reviews as a contemporary music venue, blending modern upgrades to equipment and amenities with deteriorated, preserved aesthetics. Schuler Shook and Oertel Architects were key members of the project team.

No Simple Rulebook. “In some ways, the process was more complicated than new construction,” explains Paul Whitaker, Senior Theatre Consultant / Senior Lighting Designer with Schuler Shook. “A new theater is built according to the plans, although things often come up in the field. With the Palace, plans evolved as the construction crew discovered unexpected things the team had to work through – there’s really no simple rulebook.”

For example, the design team performed some exploratory demolition work and determined that portions of the old ceiling remained above a dropped ceiling installed during a 1940s renovation. The original ceiling was uncovered and stabilized.

Because the “new” Palace was envisioned as popular music venue, the “modern ruin” aesthetic approach wasn’t seen as a negative. Whitaker says his firm has done smaller “ruin” projects like this, with cost often the determining factor. Stabilizing the structure and upgrading only where necessary requires significantly less money.

Middle Ground. Thomas Stromsodt, AIA, Senior Architect with Oertel Architects, cites the Brooklyn Academy of Music’s Harvey Theater as “the most obvious touchstone project” for this quasi-restoration approach; the Southern Theater in Minneapolis is a smaller example.

While he doesn’t believe such projects represent a trend, Stromsodt thinks this “middle ground between ‘gut and recreate’ and ‘complete restoration’” will increase in popularity as more historic buildings are considered viable for adaptive re-use.

At the Palace, upgrades included new bathrooms, HVAC system, roof and bar area. In the house, the biggest change was replacing the raked floor and seats with a flat, empty floor intended for standing/dancing patrons; 700 seats remain in the balcony. Total concert capacity is between 2,500 and 3,000 people. 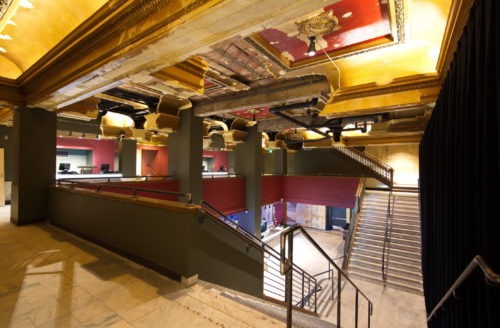 Stromsodt says none of the Palace’s mechanical and electrical systems could be re-used due to age and condition. “Where possible, we tried to use existing pathways throughout the building,” he explains. “Theatrical lighting, rigging and related equipment needed to be reinforced and re-certified for health/safety and insurance reasons.”

Whitaker says there was really no place to rig things front of house, so beams were added above the proscenium for both audio and lighting, to support a truss if necessary. “The trick was not disturbing the existing architecture,” he explains. “In the house, beams were fed up through the ceiling and cable sleeves used.” Motors can be rigged above the ceiling and the chains dropped down.

Lighting Upgrades. In this type of project, Whitaker says needed technical additions are a little easier because they can be more industrial and therefore present fewer challenges being integrated into the architecture.

As an old-style theater, the Palace lacked any front-of-house lighting positions. Box booms were added to the proscenium’s angled sidewalls; a rail was added beneath the balcony.

Whitaker says touring lighting designers can also use the built-in architectural lighting to alter the mood and dynamic of the space. Even the decorative plaster rosettes in the proscenium feature color-changing LEDs.

“Lighting designers are really having fun, getting into the building and playing with all the different toys that are already there,” he remarks. “This creates a really interesting, unique concert experience.”

Whitaker recalls his first visit to the Palace three years ago, before the project started. “Compared to today, the transformation is astounding!” he exclaims. “It was exciting to help imagine what the Palace could become and help make that dream come true.”