Design and Development of the Acoustical Shell

Auburn University in Auburn, Alabama, has a reputation as being a great school for engineering and agriculture. And now, thanks to the new Jay and Susie Gogue Performing Arts Center, it’s also a vibrant destination for artists from around the world.

As Alabama’s premier land-grant university performing arts center, the team had lofty goals for the 85,000 square foot Gogue Center. They wanted to create a space that would elevate and transform the cultural landscape for the community and the university.

“This region has always had to drive to Birmingham, Atlanta, or Columbus to have exposure to touring performing arts,” said Taylor Dyleski, Director of Production at the Gogue Center. “Now, we get to bring that to Auburn University and make Auburn an even better place to live and go to school.”

The team knew that creating the right space would have the power not only to entertain but also to inspire and engage audiences of all ages, from students to community members. To fulfill the vision of a truly dynamic space, the team knew the crux of the project would be exceptional acoustics. 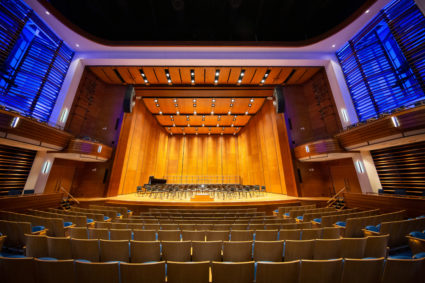 Designing the Gogue Center’s 1,202-seat Woltosz Theatre to provide spectacular acoustics was not a simple task. Every decision made, from the selection of seats to the carpet, lights, and acoustical shell, impacted the final sound. And the Gogue Center had custom ceiling heights, which led to a custom acoustical shell solution.

The team started with a strong foundation, a Diva® Acoustical Shell. Auburn worked closely with the Wenger engineers on-site, reviewing mockups and adjusting all of the pieces of the puzzle, including coffers in the ceilings and new, state-of-the-art lighting fixtures. The result was a larger than life, custom Diva shell to fit the space and fulfill the needs of the project.

“The acoustical shell was very daunting,” Dyleski said, admitting he’d been skeptical throughout the process. “They told me I’d have a 36-foot-tall tower that three people would be able to push around the stage. I never thought it would be possible, but I was proved wrong.”

Striking the Diva acoustical shell at the Gogue Center takes approximately 20 minutes, and the entire shell can be placed into performance position within 45 minutes. Dyleski and his team had anticipated a three- to four-hour timeframe and were pleasantly surprised with the end result. “It’s really impressive how easy it is for the shell to come in and out,” he said. “That’s been a good surprise.”

But, while designing the shell ceiling mock-up, Auburn University decided to switch from the specified theatrical shell light fixture to the newly released Lieto™ — our premium LED light fixture.

Lieto fixtures provide more lumen output than other fixtures currently used in acoustical shells. However, by incorporating the Lieto, less fixtures were required in the shell ceiling. 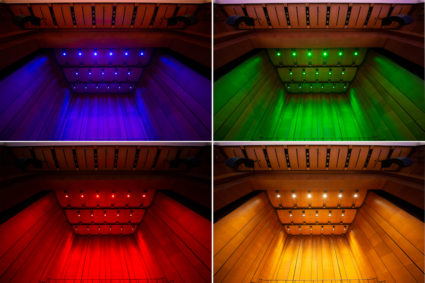 That’s when Wenger offered another unique solution. Instead of installing more white light than the Gogue Center needed and running them with less intensity, we invited Auburn University to beta test our Lieto system and new RGBW solution before it came to market in January 2020.

“Usually with orchestra shells, you have to fight trying to get light on the orchestra so they can see and be seen,” said Paul Anton, Production Manager in Charge of Lighting at the Gogue Center. “With the built-in Lieto fixtures, everything is incredibly well lit, the color is unbelievable, and the fact that we can mix and make everything a different color with everything that’s built-in is amazing.”

“Now we have something up our sleeve for when we’re doing a Pops event or when we are presenting something unconventional in front of the shell,” Dyleski said. “You’re not just stuck with white light. We can do white light, and we can do a pop of color on top of that white light, and it won’t affect the musicians while performing and reading their music.”

A Vibrant Destination for Artists from Around the World 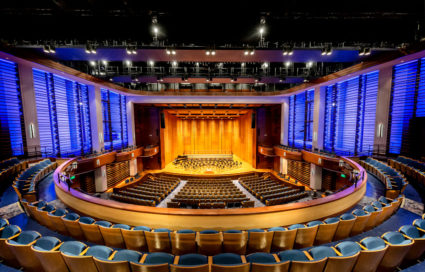 The Gogue Performing Arts Center opened its doors in August 2019 with a four-day festival after breaking ground two-and-a-half years ago.

“It is a beautiful building that provides the area with options to bring in many different types of talent and performances,” said Ryan Cole, Wenger Corporation Project Manager. “The facility’s staff are skilled practitioners and were a huge asset during the turnover process of the building. Their presence on site helped us make sure the system was set up in the best way to serve them as end-users. They wanted to be active participants in the process and absorb as much knowledge from our personnel about the products.”

The innovative solutions in the Gogue Center don’t stop with the acoustical shell and shell lighting.  The space also features:

To learn more about these products, including Lieto RGBW, visit the Wenger | J.R. Clancy product catalog. And stay tuned for Part 2 of the Gogue Center blog to learn how these additional solutions brought the space to life.