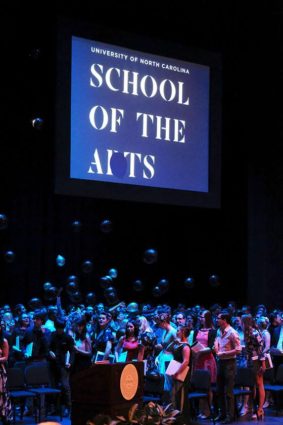 “More often than not, when my stage automation students graduate, they’re making more money than I am,” says Jack Miller, Assistant Dean for Operations at the University of North Carolina School of the Arts (UNCSA) in Winston-Salem, N.C. “Their theatre work pays well, but they must understand it’s not a 40-hour week,” he adds.

Miller started in theatre education at UNCSA almost 30 years ago and helped launch the three-year Master of Fine Arts (MFA) degree program in stage automation in 2001. “During the 1990s, more and more automation advancements were happening on Broadway and in rock ‘n’ roll tours,” recalls Miller. And while automation was taught as part of UNCSA’s technical direction program, he felt the subject justified its own MFA.

Today he believes this MFA program is unique in the United States. Most UNCSA students are technically minded; several have undergraduate degrees in mechanical engineering, with a theatre minor. Without theatre experience, Miller believes it’s very difficult for them to have success with stage automation.

While it’s impossible to guarantee every graduate a job, he says the odds are currently very good. Their students’ typical problem is deciding which job offer to take.

“For every good technician, there are 100 performers – that’s just the name of the game,” he comments, adding that those 100 aspiring performers may all be vying for only one job.

With technical jobs, even some prestigious U.S. performance facilities are having difficulty filling openings. “It’s crazy right now – I can’t really explain the void,” declares Miller, who adds that automation technicians are also in high demand.

Each year, UNCSA prefers to enroll three students into the MFA program in stage automation; ideally there would be nine students at any one time. He considers this number nicely manageable but knows that graduating only three students a year will not alleviate the industry shortage.

Despite the promising employment outlook, UNCSA has been struggling to attract applicants the past several years, even in a “hot” area like automation. As a state institution, it lacks scholarship funding that many standard liberal arts universities can offer.

Applicants to UNCSA are rigorously evaluated; once students are admitted, their numbers are gradually pared down. “If we start out with a dozen freshmen in technical direction and have between six and eight by the time they’re seniors, we’re doing pretty well,” Miller states. Of the students who leave, probably half decide it’s not a good fit.

For those who graduate from UNCSA through the MFA program, what factors determine their career success? Miller believes work ethic is foremost, even more than hands-on experience. A student’s work ethic is developed and revealed over the program’s three-year term. It’s usually strongly related to their passion for theatre.

Miller tells his students, “If you can work someplace other than theatre – go do it. Maybe sell used cars. But if your passion is here – if theatre is what you’re compelled to do – then we’re set to go.”

With incoming students, he looks for passion more than almost anything else. While their resumes and academic records might be impressive, it’s passion that makes the difference. “People don’t choose this industry for the money or the predictable working hours,” Miller notes.

Over his tenure at UNCSA, he’s watched students change; he also hears his colleagues bemoan today’s “Millennial Student” or “iPad Student” for their shallow approach to theatre education.

“There are many students today who just want to be fed answers for the tests,” Miller contends. “We try to counter that attitude as much as possible.” He appreciates UNCSA’s conservatory learning model of theatre education, which keeps students busy with a blend of shop time and classroom work.

“I always remind students that the theatre curtain goes up at 8:00 p.m. – you can’t say you’re not ready,” Miller remarks. “A manufacturing plant might delay a product shipment a week if it’s not completed, but theatre people learn to live with hard deadlines.”

From the Ground Up: Jeff Jones of Wenger