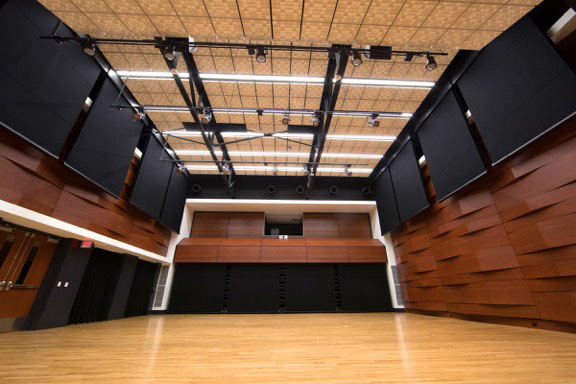 Grand Rapids Community College (GRCC) is an urban campus surrounded by the sounds of an active city. Some may find that noise invigorating. Not so if you’re one of 150 music majors competing with fluttering helicopters and wailing sirens.

That is precisely what students and staff in GRCC’s Music Center faced daily, prior to a massive, year-long renovation of the Center completed in the summer of 2017.

A Gymnasium by Design

The original cavernous building was erected in 1922 as a physical education building for Strong Junior High School. Eventually, GRCC took over the facility and used it as a field house until 1978. In 1980, after a big remodel, GRCC reopened the building as the Music Center.

Despite unaddressed acoustical challenges, the Center’s recital hall had undergone no modifications since 1980, other than the addition of a recording studio in 2000. Dobreff described how the windowed recital hall was bombarded by outside noise from city streets and the adjacent hospital’s Life Flight helicopter. Faded, old drapery did little to muffle the sounds.

In addition, the previous 1980 renovation had put the HVAC system directly over the recital hall. The roof also leaked and amplified rain noise. Though GRCC uses the off-campus St. Cecilia Music Center for auditorium space, the recital hall’s severe shortcomings were incredibly problematic.

“Our acoustics were hindering recruitment tours, especially with prospective students coming from suburban high schools that had professional performance spaces,” Dobreff explained. “Our music program has an extremely high reputation, but our facility did not.”

For existing students, digital enhancement simply could not filter out all of the unwanted noise on recordings. Beyond acoustics, the Music Center also needed essentials, from a sprinkler system to sound-isolation practice rooms and instrument storage. 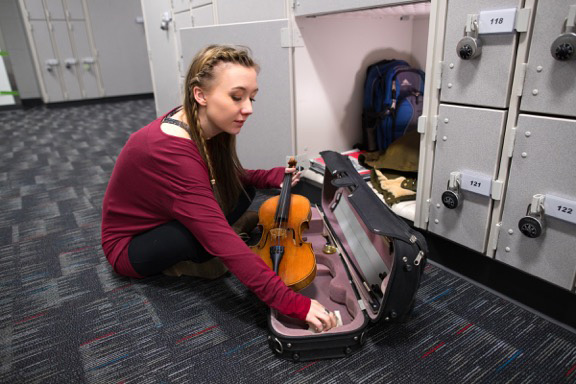 GRCC is the only community college in Michigan accredited by the National Association of Schools of Music. Clearly, it was time to gut the building, rework the floor plan, and correct the acoustics.

“Acoustical modifications were our primary reason for the renovation. We had to solve the sound transfer issues from floor-to-floor and room-to-room,” Dobreff said. Though the new, angled wood walls with interwoven protrusions and shapes helped, construction alone could not fix the recital hall’s acoustical challenges, nor could it provide the acoustical flexibility needed for various uses.

The architect invited Justin Meyer, a senior acoustical consultant with Grand-Rapids-based Acoustics by Design, to join the team.

“The renovated recital hall changed shape and volume significantly, which required a total evaluation. Additionally, the functionality of the space was challenging,” Meyer explained. The recital hall does double duty as a daily rehearsal space and performance venue. It also must house 104 retractable seats when they’re not in use.

According to Meyer, providing a space with good acoustical reflections, as well as thoughtful placement of acoustical absorption and the use of variable acoustics, was critical for the balance and variability of the reverberation within the hall.

Meyer quickly sourced the ideal, variable acoustical solution:  Wenger’s TransformTM Motorized Acoustical Banners. He had worked with Wenger products throughout most of his career and felt confident recommending the banners to GRCC.

Wenger installed 11 Transform banners in three different lengths in the recital hall. The wool-serge, double-layer, fabric banners freely deploy from the ceiling from one of two wall-mounted switches, or a third in the sound and lighting booth. Faculty and staff simply lower or raise the banners as needed. When used as a rehearsal space or with amplified sound, the banners come down. For chamber-type ensemble performances, the banners go up.

“Transform banners were ideal for providing variability in reverberation within this space, enabling it to remain flexible for many different uses,” Meyer said. “The draw to the product was its ability to provide the absorption characteristics we were looking for, and be recessed into their casings when not in use. The banners have a minimal footprint, compared to other variable products.”

Dobreff said GRCC is now proud to give tours and show its programs to the public. He’s especially fond of the variable acoustical treatment that elevates performances and acts as a teaching tool.

“The banners’ variability allows our performers to choose the acoustic environment that best suits the music being performed. It also lets our recording technology students adapt to different acoustic spaces.”

Overall, the banners play a big role in creating what Dobreff has always wanted for GRCC music students and staff. “We truly have a first-class acoustic space.”