The Whitehead Auditorium at Valdosta State University (VSU) in Georgia had a problem, an acoustic problem. 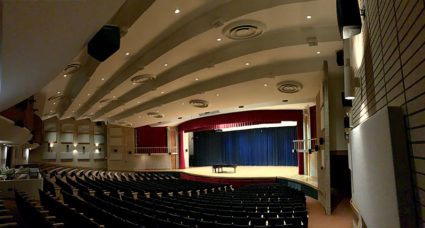 Built in the 1970s, this multipurpose facility features a proscenium stage, curtains, and rigging. Unfortunately, the onstage sound was getting trapped in the rigging, which made it hard for musicians to hear each other. They also couldn’t hear how their sound projected into the hall.

But the acoustic problems didn’t stop on the stage. The auditorium itself was also stripping away the sound’s richness and volume for the audience. “It was odd,” said Dr. Howard Hsu, Director of Orchestra Studies and Music Director of the Valdosta Symphony Orchestra. “In the audience, I could hear every note attack, but it was also dead and muddy. Playing there was a big struggle.”

In a search for solutions, VSU commissioned an acoustical study that brought more bad news. Audience members in the center of the first ten rows – considered the “best seats in the house” – weren’t hearing much of the sound produced onstage either. Instead, it was passing over their heads and not reflecting back consistently.

VSU needed more supportive and flexible acoustics that were better suited for a wide variety of performers.

Harnessing the Power of Virtual Acoustics 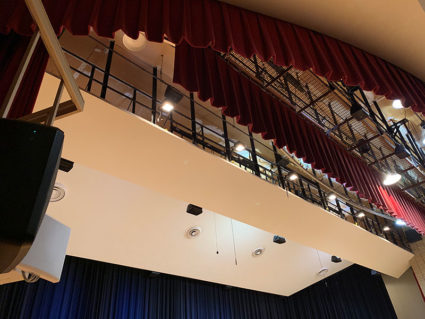 As VSU weighed different solutions, they considered a variety of options from a complete remodel to an overhead cloud system. But these improvements were expensive and inconvenient to install. Plus, the hall would have to close for six months, and there was no alternative campus venue available. Then, they learned about the Transcend® Active Acoustic System.

Transcend uses a network of strategically installed microphones, loudspeakers, and digital signal processing that can enhance the acoustics in any space. It also offers tremendous acoustical flexibility, so you can create environments that range from an intimate Baroque hall to a large, dramatic cathedral. And, because Transcend relies on fewer microphones, it simplifies the installation process and allows for lower installation costs than other systems on the market. It also creates the best possible acoustic experience for every seat in the house.

A Flexible, Easy, and Cost-Effective Solution

After learning about Transcend, the VSU team convened to discuss details, logistics, and costs. They also sent a delegation to see the system in action at Wartburg College in Waverly, Iowa, and came to our facility in Owatonna, Minnesota. After seeing what Transcend could do, VSU was sold, and the system premiered at Whitehead Auditorium in September 2018.

“There’s not a bad seat in the house anymore – you can hear anywhere,” Dr. Doug Farwell, Head of the Music Department said. He also praised Transcend’s authentic sound. “It’s warmer and fuller; the sound doesn’t feel artificial or gimmicky.  The audience’s attention is focused on the stage where it belongs.” 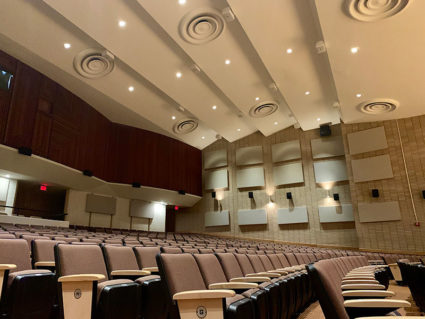 Acoustical panels on Whitehead Auditorium’s side and back walls improve the natural room acoustics and eliminate distracting flutter echoes.

The musicians also noticed a difference immediately. “Performing conditions have really improved because now our players can hear across the whole orchestra,” explained Hsu, whose symphony includes both professional and student musicians. “The sound is much richer,” he added, “which really benefits the strings. We’ve received many compliments.”

In addition to improving sound quality for the performers and audience members, Transcend also offers VSU tremendous flexibility. In Whitehead Auditorium, we also installed acoustical panels on the side and back walls to improve the natural room acoustics and help eliminate distracting flutter echoes.  With Transcend, the auditorium’s acoustics can be adjusted to suit any ensemble or event, from bands and orchestras to choirs, soloists, and spoken word. Transcend even brought VSU’s choirs back to Whitehead Auditorium. Until its installation, the choirs hadn’t performed in the space for over 15 years because of its poor acoustics. Now they enjoy enhancing their sound with the “cathedral setting,” Transcend’s wettest acoustic option.

Dr. Ben Harper, Acting Director of Bands and Director of Athletic Bands, values how such sophisticated technology is easy to use; he’s currently conducting both the wind ensemble and concert band. “I don’t have to think about Transcend – it just works,” he says, adding that installing Transcend was a cost-effective solution for fixing Whitehead Auditorium. “It’s like building a new auditorium for 10 percent of the cost.”