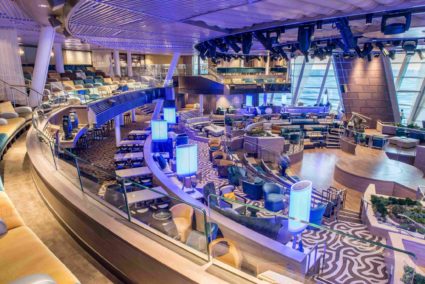 Last week we explored some of the unique design challenges for cruise ship entertainment venues, including space and logistical issues. This week we learn more about planning and technology trends, including some “firsts” on the sea.

Performance spaces onboard cruise ships may be as small as a simple stage on the pool deck, requiring only one performer and a sound tech. However, most large ships today have a half-dozen performance venues, with capacities ranging from 850 to 1,600 seats.

The largest venues are often found fore and aft on the ship with smaller venues typically in the middle, such as near the pool area. In its design work, Wilson Butler Architects (WBA) starts planning before knowing what specific programming is intended for each venue (cinema? comedy club?) while keeping versatility in mind.

One example of a flexible venue is the ice rink introduced on RCI’s Voyager of the Seas in 1999. Due to the success of this industry first, RCI later introduced ice rinks on its Freedom– and Oasis-class ships. Ice shows became so popular that RCI started a reservation system to smooth out attendance, similar to dinner seating. Along with ice shows, public skating was also available, much like at NYC’s Rockefeller Center.

The typical ice rink venue offers about 900 seats and was designed for multiple uses beyond skating. A rink cover can be deployed from a narrow slot under the seating area, using rigid chain technology like a horizontal garage door. When covered, rinks can host game shows, laser tag and other events.

For larger dedicated theaters on RCI ships, WBA is often specifying wider seats, greater row spacing and better sightlines than found in many on-land Broadway theaters today, which may be constrained by old architecture and limited building footprints. While ships have space constraints, Marcionek says there’s a freedom in starting with a blank slate.

“That’s the beauty of steel versus concrete: it’s lighter, thinner and easier to work with,” he says. “We’re very familiar with what steel can do and the shipyard personnel are extremely talented and creative.” Steel does have its architectural drawbacks, however, such as fewer finish options available and unique acoustical characteristics. 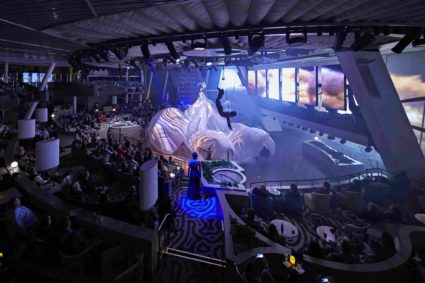 Construction techniques used for sound isolation in land-based theaters, such as thick concrete or double walls, are not feasible on ships built from welded steel plates.

WBA staff takes great care on acoustic issues to ensure there is proper absorption in the room to account for sound from the performance. Additionally, they work closely with the shipyard to ensure that vibrations from the ship are not transmitted into the theater.

Just as on land, sound absorption is often accomplished by installing pressed fiberglass panels covered with an acoustically transparent material. There are several fabric brands available; WBA often specifies Barrisol, which is micro-perforated and easily adapts to different shapes.

As with on-land venues, technology is playing a growing role today in cruise ship entertainment. The first ships WBA worked on included a “monstrously large scenic projector” that occupied the best seats in the house.

“We can design the room with lights in alcoves and other spaces,” Marcionek explains. “Unlike in the past, these lights don’t need to be refocused from a catwalk because they’re motorized and automated, including programmable LED colors.” Such lights provide greater flexibility in altering the room’s look, with significantly less labor involved.

To efficiently and quickly move performers and equipment between the theatre, pit and fly loft levels, motorized lifts are also becoming more numerous. Set pieces and scenery are increasingly being replaced with technology like LED screens and digital projectors; this helps speed transitions and save labor costs. Explains Marcionek, “On cruise ships we’re always trying to build in as much flexibility as possible, knowing that today’s technology can provide even more options.”

One notable example is found in Two70, a unique performance space on RCI’s Quantum of the Seas, which launched in 2014. Named for its panoramic 270-degree ocean views, Two70 was designed in collaboration with 5+design as a multi-media venue with digital projection equipment, floor-to-ceiling window screens and robotic LED panels. During the day it’s a passenger lounge and bar; at night it fluidly transforms to accommodate a variety of performances, providing interactive entertainment that surrounds the audience.

Two70 does not have a stage house or full fly tower, but features a full deck above for catwalks and flying rigs and below for lifts and prop storage. (For a closer look at the venue’s 24×7 versatility, click here. Or click here to see behind-the-scenes production activity.)