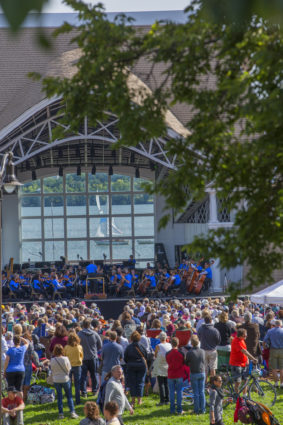 All images are by photographer Greg Helgeson

For many people, the long 4th of July holiday weekend involves attending leisurely outdoor concerts in idyllic settings, lounging on blankets or lawn chairs while nibbling delicacies and sipping a favorite beverage.

While the musicians’ performance may sound effortless, earning them well-justified applause, the thorough preparation and logistical efforts behind the scenes by the technical staff also deserve accolades.

Joel Mooney is Technical Director for the Minnesota Orchestra, which begins its annual weeklong series of free outdoor concerts at venues around Minnesota and Wisconsin on July 3, traveling nearly 300 miles. He paused during a busy preparation week to share his behind-the-scenes perspectives on this almost half-century of tradition.

“These free public concerts attract the gamut of people, from die-hard classical music lovers to casual picknickers to people just out having fun,” says Mooney. “It’s really exciting for the orchestra because we’re reaching new people and touching these communities in a big way.”

The “Symphony for the Cities” series attracts sizable crowds at beautiful venues in Minnesota, including the Lake Harriet Band Shell in Minneapolis on July 3, the Hilde Performance Center in Plymouth on July 5 and the Lake Park Band Shell on the shores of the Mississippi River in Winona on July 7. The final concert is in Hudson, Wisconsin, on July 9, along the St. Croix River. This concert series will be conducted by Associate Conductor Roderick Cox.

Mooney began working with the Orchestra 15 years ago, started part-time in 2006 and has held his current position since 2014. He says outdoor concerts bring their own special challenges.

“Our outdoor crowds are usually much larger than at typical indoor venues, so we mic the orchestra to ensure they can be heard,” Mooney explains.

“We use the same standard microphone array outside as we would inside Orchestra Hall, including center, left and right, along with a woodwind and brass feature,” he says. Extra mics are added to help define soloists and lead players. All the mic stands are on the stage floor, rather than suspended, to ensure the stage can be cleared quickly during inclement weather.

Along with unexpected gusts of wind, the orchestra and audience can expect thunderous cannon blasts, sampled via digital synthesizer to punctuate Tchaikovsky’s “1812 Overture”.

For off-site concerts, indoors or out, the orchestra’s technical crew typically numbers around seven people including librarians, stagehands and manager on duty. Certain events may require additional support.

Mooney considers thorough preparation essential for a successful tour. “Even before loading the instruments, we spend a lot of time planning and gathering information,” he remarks. Other orchestra personnel and artistic staff also assist with the many details.

On the morning of the first concert, the orchestra holds its final rehearsal at Orchestra Hall. This provides the chance to see everything come together before it’s packed up.

As much as possible, orchestra personnel try to plan for every contingency. “We bring along rain jackets, extra tools, spare wheels, bug spray, cough drops – you name it,” notes Mooney. “Just in case!”

Like proverbial “fish stories” – possibly embellished over time – Mooney has heard tales of past outdoor concerts impacted by weather:

“Once we were out performing on the shore of Lake Minnetonka, when a huge storm came up. The stage was cleared and everything blew over. Later we rushed back out to set up everything. Soon after, the sun came out and the concert resumed…

“Another outdoor performance was at a horse-racing track. When a large storm came along, everything became covered in mud from the race track, making packing up and leaving difficult – and messy!”

Less dramatic – but equally memorable – are the many years of beautiful summer evenings with thousands of people placidly enjoying the music, getting along and having fun.

Best wishes for a safe, happy and music-filled holiday!