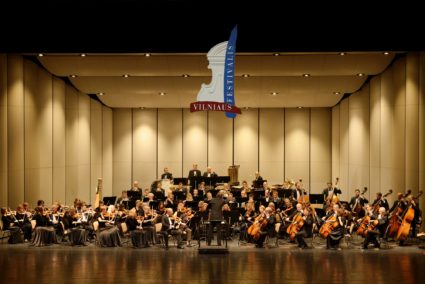 The rich history of opera in Lithuania traces back nearly 400 years to 1636, when the Grand Duke’s court theatre hosted the country’s first opera performance. The city of Vilnius became one of the first European capitals acquainted with this new artistic genre.

Over the centuries, the theatre survived as an important center of national art and culture. In 1974, while Lithuania was part of the Soviet Union, the theatre moved to a new venue, with seating capacity over 1,100 and modern technical equipment. Its stage was one of the more famous of the Soviet Union. In 1990, when Lithuania regained political independence, a new chapter in opera excellence began.

Today the Lithuanian National Opera and Ballet Theatre (LNOBT) is a nationally supported institution committed to creating and producing works for musical theatre, assuring their public performance on the highest artistic level. It is operated by the Ministry of Culture of the Republic of Lithuania.

This theatre’s latest technical upgrade is a new Diva acoustical shell from the Wenger Corporation in the United States, installed in May 2017. In proscenium theatres, acoustical shells help connect the stage and audience areas into one acoustical space. Without a shell, much of the sound produced onstage by musicians ends up lost in the fly loft above the stage or in the offstage wing space. Such conditions make it difficult for musicians to hear themselves and each other; this also compromises and diminishes the sound heard by the audience.

This particular shell consists of nine sound-reflective side and rear towers placed on the stage floor to surround the performers. Above the stage are four rows of ceiling panels suspended from the overhead rigging system.

Together, the shell’s elements effectively seal off the backstage and above-stage areas, minimizing the leakage of sound into these auxiliary spaces and maximizing sound projection across members of the group and out toward the audience. The convex shape of the towers and ceiling panels helps scatter the sound. Both are constructed of a composite-panel honeycomb-core material that creates an acoustically reflective surface, effective across a broad range of musical frequencies.

The positive impact for the audience is measurable. One academic study showed acoustical shells increase the strength of sound by more than 3 decibels (dB) at many seat locations in multipurpose halls, which is approximately equal to doubling the size of the performing group. The effects onstage are even greater – more than 5 dB – according to findings published in the Journal of the Acoustical Society of America.

Paulius Sukys from AV Systems in Vilnius was the technical buyer for the LNOBT on this shell project; he believes it is the first such acoustical shell in Lithuania. “Wenger was selected for its proven ability to fulfill customer requirements,” he says. Functionally, those requirements included dimmable lights integrated into the ceiling panels and specific weight limits for those panels. Aesthetic specifications included three shades of gray paint on the panel surfaces.

When not in use, the shell towers can be moved into a compact, offstage storage position with a manual, wheeled mover. Each ceiling row is engineered to come apart in three sections for easier storage in the fly loft. Going forward, it’s expected this shell will be used approximately one or two times every three months. The performances will range from soloists to full orchestras, and everything in between. The shell’s design enables different configurations to suit various ensembles, such as a short shell that removes one or two towers from each side wall.

Sukys praised the Wenger installation crew as “great” – polite and patient throughout the process, accommodating to the LNOBT’s engineer’s directives and preferences. Should any field adjustments or minor repairs be required later, he also appreciated the Wenger crew leaving behind a set of specialized tools used to complete the shell’s on-site installation.

The shell has made an immediate, positive impact according to Sukys. Before the shell, only audience members in the center of the theatre could hear well; now he says the sound field outward from the stage to the audience is approaching 180 degrees. Even a singer whose back is to the audience can still be heard clearly.

Commentators in the Lithuanian national media have also been complimentary. Music critic Zivile Ramoskaite wrote, “I’ve already mentioned the flowing, soaring voice of the singer – indeed, it‘s probably the first time that we‘ve witnessed the perfect floating of sounds on this stage, coming both from the soloist and the orchestra. An old dream to acquire an acoustical shell finally came true…“

Asta Andrikonyte, a reporter with the national daily newspaper, described the new shell’s contributions to a recent successful concert: “An acoustical shell, which was engineered especially for the theatre…significantly improved the sound quality. From now on, performers will be able to feel as if they were in a gorgeous concert hall….Acquiring the shell is a truly important event.”

(This case study recently appeared the July/August edition of Mondo DR. All photos from Martynas Aleksa, for LNOBT.)