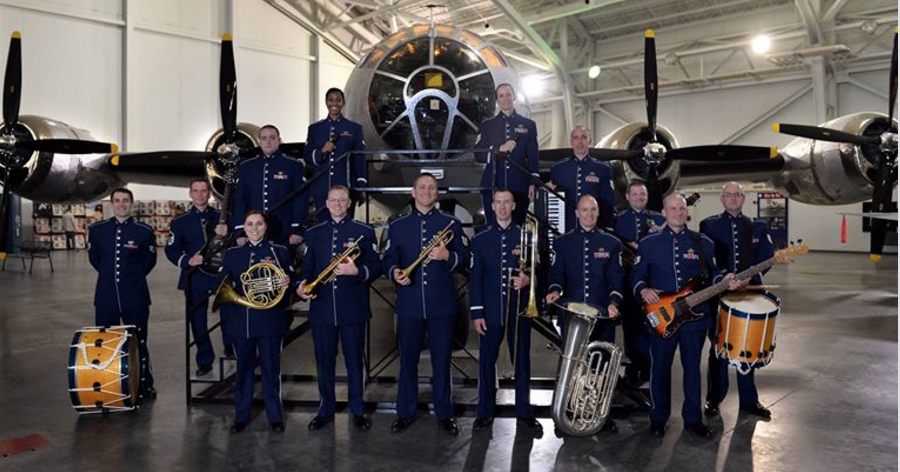 “We honor all who have nobly served in the United States Armed Forces by commemorating the contributions of our nation’s veterans – past and present – both at home and in deployed locations around the world.”

“We hope our performances, especially over Memorial Day weekend, inspire a feeling of patriotism through our music,” says Technical Sergeant Jarrett Robinett.

He’s a percussionist with the United States Air Force Heartland of America Band based at Offutt Air Force Base in Nebraska. It’s one of the smaller active duty units for the Air Force military band program, with 15 enlisted members and one civilian specialist.

“We also hope to evoke a deep sense of appreciation for the sacrifices of our nation’s veterans, their families and others left behind,” notes Robinett. The unit’s four mission pillars are Communicate, Honor, Inspire and Recruit.

Robinett says they evaluate each concert, whether a military or community performance, and consider those pillars while crafting their outreach. This could be a recruiting trip to a local high school or a memorial service at a veterans home.

The Heartland of America Band will be busy this Memorial Day weekend, including at the nearby Eastern Nebraska Veterans Home, where their ceremonial brass group will perform as part of a larger annual ceremony. This military band is also performing at a flagpole ceremony at the Omaha VA Hospital and a memorial service at the Offutt Air Force Base cemetery. Right up the road is the new Omaha National Cemetery; the band played at its August 2016 dedication and provides ongoing support, including for funerals of active-duty military.

In public performances, Robinett considers a military band as stand-in for the larger service branch. “The Air Force has bands because the public cannot shake the hand of the F-16 pilot, the mechanic who keeps that plane flying or the guard who protects the airfield,” explains Robinett. He adds that the band accepts the public’s gratitude on their behalf and shares with the public how amazing those non-musician airmen are at their jobs.

All the Air Force active duty bands follow a rotational deployment schedule – there is always a band from the Air Force deployed somewhere, such as the Middle East or Southwest Asia. A six-member team from the Heartland of America Band was deployed overseas last August through November.

When they’re away (“deployed to undisclosed locations”) band members may be out near the front lines, entertaining troops acoustically. Other times they may be back at more guarded locations where they can set up a traditional rock ‘n’ roll or blues show. They also provide protocol music for certain diplomatic functions and outreach to local host schools supported by the State Department.

As the unit’s deployment manager, Robinett prepares all the required travel documentation and provides training and support. He says returning airmen claim their deployments changed their perspectives about their mission, making them realize how important it is to help boost troops’ morale.

Once at a concert band performance, Robinett recalls playing the chimes for ‘God Bless America’ standing near the front of the stage. He had a good view of the audience and a gentleman in the front row wearing a Vietnam veterans cap who used a walker to move around. Robinett first saw this vet singing along. By the end of the song the vet was openly weeping.

Later in the concert, during a medley of military service songs, this vet was standing up, clapping and cheering. “For the first time, I realized this was about much more than me enjoying making music,” recalls Robinett. “We were really doing something powerful.”

This armed services medley is now one of Robinett’s favorite songs to perform. He loves watching the audience and trying to guess who served in which branch. “You can always recognize people who served – they carry themselves a little differently,” he remarks.

Whether members of the Heartland of America Band are deployed overseas or performing at the local veterans home, Robinett says their goal is to lift up spirits. “Today’s deployments take care of today’s heroes,” he concludes. “Our performances over Memorial Day weekend ensure yesterday’s heroes are never forgotten.”