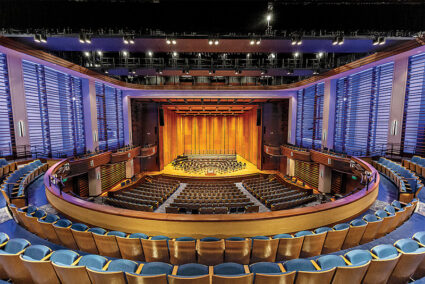 The Gogue Center brings performers from all over the world.

From the very beginning, the team at Auburn University knew the 85,000-square-foot space would require superior acoustics. This forward-thinking would ensure the Gogue Center’s 1,202-seat Woltosz Theatre could accommodate every type of performance, and that each experience would leave audiences wanting more.

“The reaction so far has been amazing,” said Paul Anton, Production Manager for Lighting at the Gogue Center. “This is something different that the community of Auburn hasn’t experienced before. So far, it’s brought a lot of new music acts and different acts that they haven’t had a chance to see.”

“We spent a substantial part of the investment on acoustics,” explained Chris Burke, Production Manager for Audio at The Gogue Performing Arts Center. “We wanted this to be perfect and rival any performing arts center in any major city.”

Setting the Stage for Extraordinary Acoustics

“Mark and the Wenger team were willing to customize the shell to address key acoustical requirements that our office considers important,” Todd said. 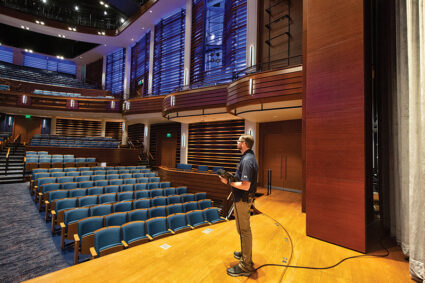 To create flexibility, they added 10 Wenger Transform® Motorized Acoustical Banners along both house right and house left of the audience chamber. Each of these banners can be individually controlled by a J.R. Clancy SceneControl™ 12 Motion Control System, so the user can lower or raise them to adjust the acoustics in the room.

“It’s very customizable and adaptable,” Burke said. “The banners are great for our multi-purpose venue. If we have a classical artist, the banners can be up, so we get the best live sound as possible. We can put them down for amplified shows where we need to absorb the acoustic energy in the space.”

“We’re connecting the sound on stage to the audience, and allowing the musicians to really hear themselves, hear each other and react to the room,” Todd said.

Though acoustics were a priority for the shell, it also had to be beautiful and blend into the existing room. 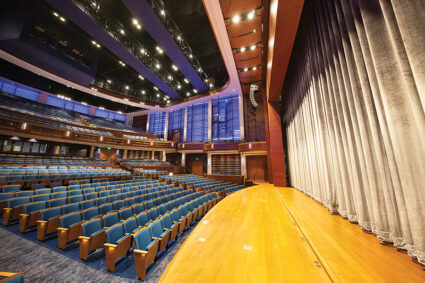 Kelly Chiaradonna drew inspiration for the shell from local materials.

“It was a little bit of a three-way effort,” said Josh Stiling, Senior Associate Architect at Wilson Butler Architects. “We hit the ground running with the theatre consultant and acoustician. We had a great history with Akustiks and Theatre Projects and collaborating early was critical. The process involved several iterations and design reviews.”

Kelly Chiaradonna, Josh’s colleague and Interior Designer at Wilson Butler Architects drew inspiration for the look of the shell from local materials. She chose southern heart pine in both lighter and darker stains for the veneer of the shell.

Stiling said the shell towers work well since theatre staff can move them around more easily, breaking them down in under an hour.

“It was very fluid working with this team because everyone knows where their strengths are, and we knew what to expect from each other,” Stiling said. “This was a very collaborative design.”

Bringing It All Together with the Right Rigging

A shell of this size would normally take hours to set up and strike, but Wenger’s engineers made it so three people can place the entire shell into performance position within 45 minutes and strike in just 20 minutes. 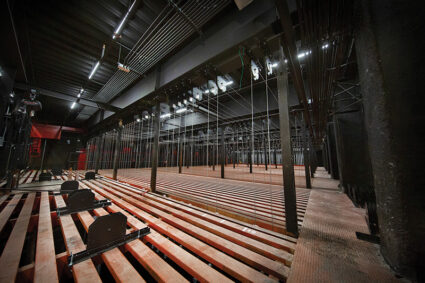 J.R. Clancy automated rigging controls can place the shell in performance position within 45 minutes – and strike in only 20.

As the theatre equipment designer on the project, Michael Nishball, Principal at Theatre Projects, took the lead and recommended J.R. Clancy automated rigging and controls. They installed the following:

“We worked with the design team, including the architect, theatre consultant, acoustician and Auburn staff to ensure we delivered what they needed while providing multiple options,” said Ryan Cole, Project Manager at Wenger Corporation.

“Wenger | J.R. Clancy has been a leader in equipment development and ISO quality control, as well as safety, training, inspection and maintenance,” Nishball said. “We have worked with them on many projects and enjoy collaborating with them.” 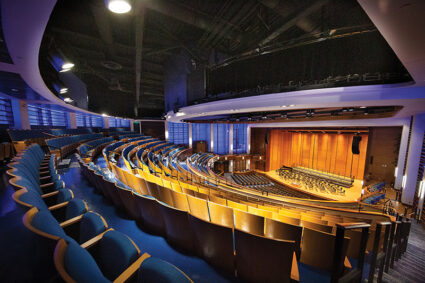 The Gogue Center opened in 2019 and has been turning heads ever since.

The Gogue Performing Arts Center opened its doors in August 2019 and has been turning heads ever since.

“The community reaction… it makes me feel good,” said Taylor Dyleski, Director of Production at the Gogue Center. “This was a lot of hard work for my team to get this building up and going in a short amount of time, and to watch someone come in and just be shocked. And everything we’ve put on stage people have loved – and it’s been across the board. It’s a new gem. It really adds to this community.”

To learn more about the Gogue Performing Arts Center, read PART ONE – Building a New Gem at Auburn University.

Introducing Vantis™: It’s All About Control