What – or who – does it take to inspire a lifelong love of music? For some, it’s a loving parent. For others, it’s a passionate educator. For Andrew Perry, it was both, and they instilled such a love of music that he’s still passing it on to others today, nearly 50 years later.

But it didn’t stop there.

“About 6-7 years ago, I was thinking, I’m a teacher. I’m teaching all these wonderful people to play their horns,” said Mr. Perry. “And you come out of high school and maybe play in college, and then what happens? You’re not allowed to play at that high level again.”

That realization prompted him to start the Camillus Community Band, which has grown from 55 musicians to 70, including many former students. Their most recent concert featured a new score: “The Rise of the Unicorn.” This special piece of music was commissioned for Mr. Perry when he retired, a follow-up to an earlier piece he’d commissioned himself years earlier. And it all started with the French horn.

Before Mr. Perry was on the staff at West Genesee High School, he was a student in the school’s band.

“When I was in fifth grade, and my dad went to a beginning band meeting – I wasn’t invited,” Mr. Perry chuckled. “He came home and told me I was playing the French horn.” 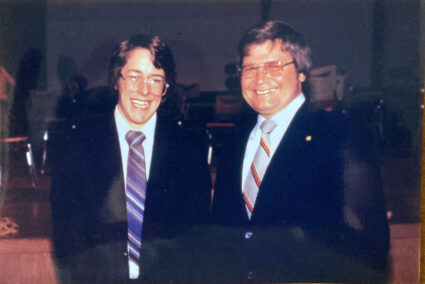 Mr. Perry may not have picked the French horn, but he took to it enthusiastically. And during his high school years, he ended up studying under Bruce Burritt, a famous band director. While teaching at West Genesee High School, Burritt built the West Genesee music program up to the national level it knows today, and many of his students went on to pursue careers in the music field, from Burritt’s son Michael to Mr. Perry himself.

But the way Burritt inspired his musicians went deeper than their relationship with an instrument – he also showed them the importance of having a dedicated and talented teacher.

“When I got to Curtis Institute of Music to play my audition, I realized I wasn’t really that good, so I focused on teaching instead,” Mr. Perry laughed. “After school, when a West Genesee job came open, I kind of fit the mold. I was more or less a conductor, I was a brass teacher, and I was still deeply involved in marching band.” 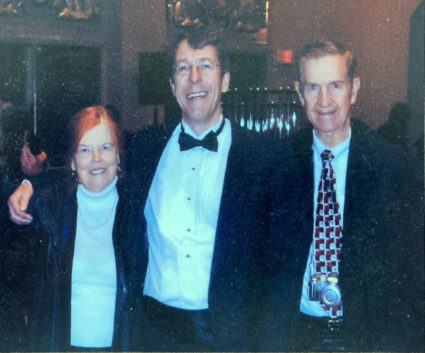 Andrew Perry with his parents

Burritt hadn’t been Mr. Perry’s sole inspiration with music. His parents were also passionate about it and heavily involved in the West Genesee music program. And, like many people in the community, their involvement didn’t end when their kids graduated.

“My mom and dad were never musicians themselves, but all four of their children played instruments, so they were perpetual band parents. Dad was an engineer, so he would build numerous things for the band. I still stand on the podium he built for the program,” Mr. Perry said. “They were still involved when I got hired in 1987, and it lasted well into the 90s.”

In the spring of 2009, Mr. Perry’s mother passed away. That fall, he met esteemed composer Rossano Galante as the Central Winds Music Educators Wind Ensemble was preparing “Transcendent Journey” for a Midwest performance in December. They struck up a friendship, and Mr. Perry asked about commissioning a piece on behalf of his mother.

“Andrew Perry has been a true inspiration to me,” Galante said. “He asked me to write a composition that was more melancholy and darker than my joyful, heroic music. That work was titled Cry of the Last Unicorn, a piece I am so very proud of.”

In this moving score, a unicorn stands over its mother, mortally speared by hunters. As it mourns, it realizes it’s the last of its kind, and begins to fear a similar fate. The last unicorn attempts to run away, only to get chased by hunters and, like its mother, speared for its mystical horn. But before the hunters can make away with the horn, the horses of the forest gather and trample the hunters, killing them all. The piece ends as the horses form a reverent circle around the unicorn until it passes away. 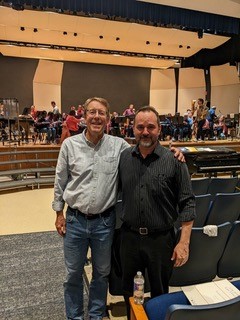 The West Genesee High School Wind Ensemble premiere of “Cry of the Last Unicorn” took place the following Spring of 2010, and soon became a favorite for musicians and audiences alike.

“Performing ‘Cry of the Unicorn’ with my students for the first time was a highlight of my career. Rossano’s composition exceeded all of my expectations,” Mr. Perry said.

“I was in the band with Mr. Perry that played ‘Cry of the Last Unicorn’ in its inaugural performance,” said Maggie McInerney. “At that time, it was by far everyone’s favorite song and a really neat experience to work with a composer on an original.”

Now, more than 10 years later, the unicorn will rise again.

When Mr. Perry retired recently after 34 years at West Genesee High School, his students set out to commission a very special gift – a follow-up to “Cry of the Unicorn” by Galante. Their fundraising efforts were so successful, it included a working session with the composer at a recent Camillus Community Band rehearsal.

“I was approached by Greg Borsz, Andy’s colleague, to compose another composition honoring Andrew Perry’s music career and celebrating his impending retirement,” Galante said. “I asked Andy what type of music he would like me to create, and he said that a sequel to ‘Cry of the Last Unicorn’ would be an exciting idea. I agreed and composed, ‘Rise of the Unicorn.’ Andrew Perry has been a great supporter of my music, and for that, I am humbled, flattered, and deeply moved.” 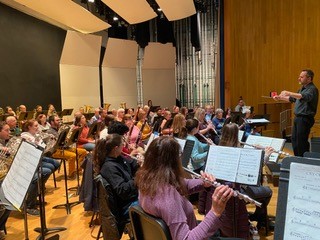 Rehearsing “Rise of the Unicorn” with Galante, November 2022

“Now that we’re playing the sequel dedicated to Mr. Perry, it just feels so much more meaningful and like coming full circle with a composer that developed a relationship with him over the years,” McInerney said.

“This is my second season of community band,” McInerney said. “I was really nervous to play again because I didn’t know anyone, but as soon as I got there Mr. Perry gave me a big hello and, after getting through the rehearsal, I felt like I was right back in high school. Mr. Perry was absolutely the kindest teacher I had in high school, supportive of band but also life outside of band. You can tell that he loves what he does; it’s obvious he’s having fun up there and that makes it fun for everyone in the band. He is also an excellent communicator – it’s tough to get 70 people who have nothing in common, except for two hours of practice a week, to match stylistically. But he manages to get everyone on the same page and play six songs brilliantly.” 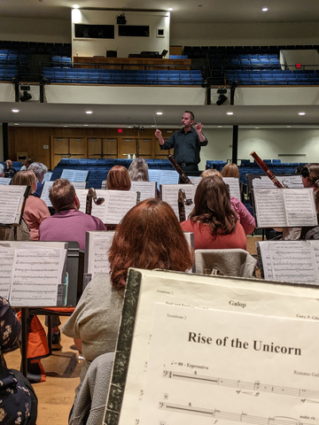 Rehearsing “Rise of the Unicorn” with Galante, November 2022

“I try to always rehearse with focus, but you can’t take yourself – or your music – too seriously,” Mr. Perry said. “People like to play instruments and make music because they enjoy it, and they like the person they’re playing with. Plus, there’s something about sitting in the band, contributing to the whole ensemble. It’s an experience that’s really hard to identify with if you’ve never been a performer. I think those are some of the reasons why kids stick around.”

In addition to the Camillus Community Band, West Genesee High School also has a reunion event that attracts former band students. Every five years, they put a call out to their alumni base. Their last reunion had 500 students return to march again.

Mr. Perry observed that over his 30 years of teaching, he was always fortunate to have a supportive community, school board, and staff. That meant that while there were bumps in the road here and there, the music programs at his school never faced devastating setbacks. Instead, the challenges that came along had more to do with the increased competition for a student’s time.

“Twenty years ago, many activities and sports were seasonal, but now they’re done year-round,” Mr. Perry observed. “That commitment makes it harder for kids to spend time on multiple activities, so now they start having to choose one thing over another, often at a very young age. That can lead to a huge time commitment that may not work out, like when they get to high school after years of focusing entirely on lacrosse but don’t make the varsity team. Then what?”

Mr. Perry faced those challenges by trying to find balance between making music appealing while achieving high-quality standards at the same time. His strategies and commitment struck a chord with many of his students over the years, including Gary McAfee, another former student in the Camillus Community Band, who shared this moving message.

Growing up in a music program like West Genesee, there is a feeling of pride, loyalty, and commitment that stays with you throughout your adult life. You think of the people who came before you and established the success; the ones you sat among during your time; and those you continued to cheer who followed in your footsteps. It is truly a musical community we all share – rooted in Camillus but stretching beyond the boundaries of the town, the state, even the country.

But for so many of us, the opportunity to enjoy performing as we once did only remained within the memories.

Then along came Andy Perry and his vision.

A graduate of West Genesee, Andy went on to a long, illustrious career with this very same West Genesee program. Therefore, who better to bring to fruition the idea of an ensemble based on decades of the school’s finest performers and complemented with additional local talent. And so, in 2017, that vision of a Camillus Community Band became reality.

I have had the absolute pleasure of being a member of the Camillus Community Band from the start. And though the memories of the past still hold strong, no longer do I have to rely solely on them for my musical experience, as I now have the privilege of performing with the people who came before me, the ones I sat among, and those who followed in my footsteps. Together we are making new memories!

Music plays such an important role for so many people growing up, it almost creates a sense of home. Mr. Perry’s passion and dedication has inspired a world for his students where they can always find their way back home. 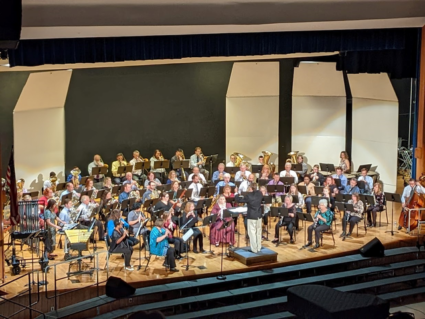