The University of North Alabama (UNA) in Florence knew their aging Norton Auditorium needed serious equipment updates. They also knew it would require a major renovation to continue serving the changing needs of their band, orchestra, choir students, and performing arts departments.

In the end, new technology would come to the rescue, improving both the sound and safety of the upgraded space. 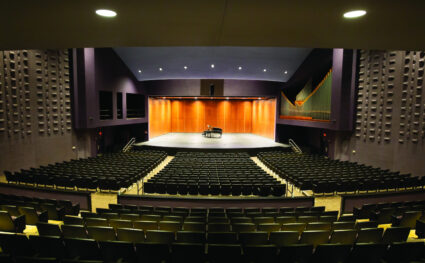 To set the stage for the Norton Auditorium upgrades, Wenger Corporation started with a custom Wenger Diva® Acoustical Shell.  The previous stage only had curtains, which absorbed much of the sound musicians produced. Ethan Franks, Assistant Technical Director at the theatre, remembered playing there as a student.

“The tubas and horns had to blow extra hard because their sound went right up into the rafters,” Franks explained. “The space before was dead, but now, with the addition of the shell, the musicians can hear each other better and produce much better sound.”

Senior Regional Sales Manager Michael Duba said the purpose of adding the shell was to allow the music department to get better and broader use of the stage.

“Without a shell, it’s just curtains that soak up all of the energy,” Duba explained. “The shell makes it so the orchestra can hear themselves and the sound projects out to audience. The musicians perform better, the audience can hear better and visually, it’s beautiful.” 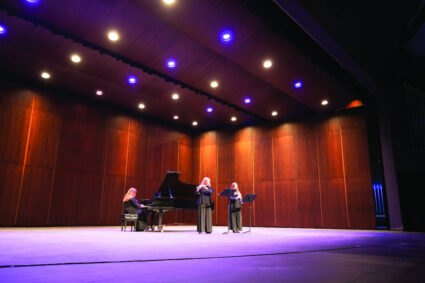 The custom Diva also includes a large selection of veneer finishes to choose from, allowing it to match almost any stain. Franks and his staff worked with a designer to choose the ideal combination to complement the rest of the room. Franks said it corresponds perfectly with the new paint and audience seating.

In addition to custom veneer finishes, Diva shells also come with innovative Lieto™ LED lighting fixtures. Franks opted for Lieto RGBW lighting in the shell, which provides multi-colored lighting options during concerts. Franks also added LED locking rail lighting to ensure safety backstage, especially while running the rigging during performances. Not only does this feature help everyone see better backstage, but it helps control the amount of light bleeding onto the stage.

Upgrading the Rigging for Better Stability and Function

Norton Auditorium’s rigging also needed a major update. The original space only had 20 battens for all of the scenery and lighting sets, far from enough to accommodate their needs. Plus, they were operating with a completely manual system.

The first step in upgrading the rigging involved installing J.R. Clancy FrontLoader® — Front Loading Arbors, along with 42 truss battens to improve both stability and functionality. Then, they automated their counterweight system with J.R. Clancy PowerAssist® Hoists. This upgrade makes it easier and safer to move heavier lighting and scenery battens on stage. 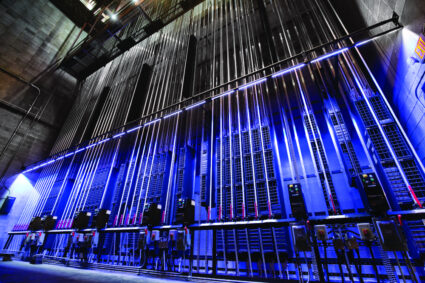 The PowerAssist system also handles up to 1,000 lbs of the out-of-balance load for the line set, eliminating the need to adjust the counterbalancing weights. The single-axis units are compact and were easily installed under the locking rail. As an added safety bonus, all control stations are equipped with key-operated switches to prevent unauthorized use.

“The rigging is much better and safer now,” Franks says. “We have a revolving student staff, so we really need something that is stable and easy to operate.”

The final touch in the UNA’s renovation focused on keeping the band organized by installing a new Wenger instrument storage system with adjustable shelves in the band room.

The upgrades for sound, rigging and storage have met rave reviews.

“We opened up the auditorium to let people hear the band rehearse and 50 people showed up just to hear the new sound,” Franks said. “Everyone has been absolutely thrilled with the shell. We’re the largest space on our campus so a lot of events have been moved over to our auditorium.”

“I was so happy that we could do this for them,” Duba said. “Their system was in dire need of an upgrade and now that it is vastly improved UNA can use the space the way it was intended to be used.”