In smaller cities from coast to coast, community-based performing arts centers are on the rise. And with the growing demand comes the need to make these spaces as adaptable as possible. 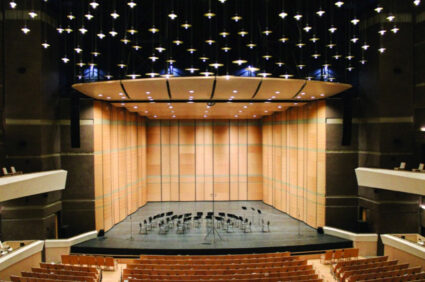 The Buddy Holly Hall of Performing Arts and Sciences (BHH) in Lubbock, Texas, is a shining example of the new vision for community-based performing arts spaces. Lubbock has been home to so many incredible music greats, the people who live there often say that if music lives in Austin, it was born in Lubbock. But until 2021, they didn’t really have a performing arts space to call their own.

The BHH maximized aesthetic goals and the need for versatility, while staying within a fixed budget. And, thanks to the Diva® Acoustical Shell, we were able to provide a single custom solution for both of their theaters.

The Helen DeVitt Jones Main Theater at the BHH seats 2,297. The striking walls of the audience chamber feature undulating patterns of horizontal stripes running right up to the proscenium. These physical reveals provide high-frequency sound diffusion that flattens out as they reach the stage. But they don’t stop there. Instead, they continue onstage as silver-stained horizontal stripes inlaid into the Diva acoustical shell towers’ white oak veneer. 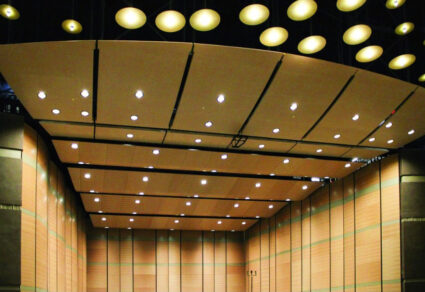 “The audience chamber’s walls seemingly melt into the shell,” explained Michael Lukasik, Senior Associate with Diamond Schmitt Architects (DSA). “The design intent of this visual connection was accomplished beautifully – the performance space almost becomes an appendage of the audience chamber.”

When fully deployed, the Diva shell consists of four towers on each side, four along the back wall, and four rows of ceiling panels. BHH can also adjust the shell’s size to suit smaller ensembles or solo performers. 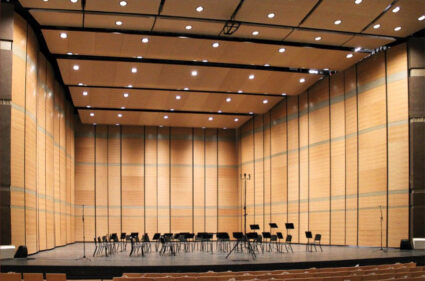 This custom Diva can adjust to suit any size performance.

The large size of the Diva towers – each 34’ tall – was partly dictated by the hall’s three balconies and Lubbock Symphony Orchestra’s unique arrangement that includes platforms for woodwinds and brass; they also occasionally perform with a large chorus. When in performance position, each tower opens to be 12.5’ wide. However, in storage position, the 12 towers nest in an upstage area measuring only 143 square feet.

“We were pushing the limits with these towers,” Rivera said. “But we were confident the shell could be executed successfully and safely.”

And, while the stunning shell provides audiences with a visual link between the stage and the house, they can also hear the clear connection between the spaces, from the main level to all three balconies. The versatility of the shell is an integral part of the theater’s fully adjustable acoustic system that also has acoustical banners. Plus, onstage, the shell enhances communication among the musicians.

A Space to Learn, Practice, and Perform

The goal of the smaller venue, the Crickets Theater (CT), was to provide local Lubbock ISD students with an accessible, high-quality venue to learn, practice and perform all aspects of performing arts – from concerts to competitions – including technical production. As such, Rivera wanted an acoustically supportive environment that allowed instructors and students to hear each other clearly.

A custom Diva offered the ideal solution for this studio space as well. For several reasons, including easier setup and turnover, the design team chose to mount the CT shell’s rear towers in a permanent position to the upstage wall. When not in use, curtains conceal them from view. And, as in the larger theater, this shell’s side walls rely on movable towers to provide flexibility.

Permanently mounting the rear towers presented initial challenges for accessing necessary electrical outlets and A/V panels on the back wall. However, Kimberly Corbett Oates, Partner with theater consultant Schuler Shook, believes they created a successful solution: a combination of customized cutouts and doors built into the shell.

“Neither of these shells were simple off-the-shelf items,” Corbett Oates concluded. “But past experience gave us confidence that Wenger Corporation could deliver high-quality products to meet each venue’s specific needs.”